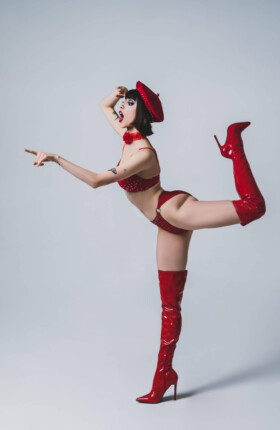 What do you get when you cross the Eiffel Tower with an 80s rock show? You get Lotta L'amour! This statuesque, real-life showgirl embodies classic Parisian style, with a metal studded dark side. She's glitz, glamour and luxury, with a cheeky penchant for tattoos and hard rock.

You'll be fixated as her powerful queer presence commands your attention, in disbelief when she kicks her legs up next to her ears, and crying tears of laughter when the comedy switch is flicked. Expect killer dance moves and a gaze so hot it’ll melt your face off!

Lotta L’amour is an ex full time ballet student from the age of 2, professional dancer, showgirl and burlesque artist. Throughout her ballet training, she always had a taste for the sensual side of dance. After completing her full time ballet studies at 18 she moved to London to train in multiple styles of dance. After six months in London at 19 she moved to Paris to begin her first professional contract at Le Moulin Rouge. After 3 contracts including promotions to topless line replacement and cancan duo, Lotta decided to return to Perth to get involved in the West Australian burlesque scene.

At first she stepped in carefully, but after her solo debut she hasn’t looked back. Lotta came runner-up in The Apprentease Awards 2020 and has performed around Perth and regional areas. Lotta also did another four professional dance contracts at Crown and His Majesty’s Theatre. She was a principal in “Cabaret de Paris” three times, performing a burlesque solo to thousands, and performed in “The Ultimate Vegas Show”. Lotta also casted, choreographed and staged the finale Cream in Perth Symphony Orchestra’s show: Nothing Compares: The Music of Prince at HBF Stadium.

Lotta incorporates everything she has under her belt in her Neo-burlesque style and is continuing to impress audiences across Perth with her dance ability and sensual style, with a cheeky slice of comedy.

See more of Lotta L’amour in Photos and Videos